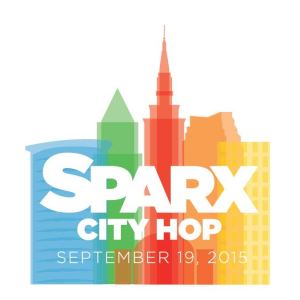 The 13th annual SPARX City Hop will be held on Saturday, September 19, 2015 from 11am – 6pm. We hope you are planning on being a part of it! Cleveland’s inner most districts will be in full swing as our community explores the visual, culinary and performing arts of our city. For the past few years, nearly 20,000 people have “hopped” throughout our neighborhoods as a part of Sparx City Hop, an official program of the Downtown Cleveland Alliance.

An annual program (in its 13th year) SPARX is a celebration of everything that is in Cleveland’s most central and metropolitan neighborhoods. While the one-day event has grown into a large draw (annual attendance of 20,000), the Downtown Cleveland Alliance sees the impact extending far beyond just the event.

Take a look at what City Hoppers can expect during SPARX!!
Click below to watch the video.